A guided tour of downtown Valence is organised on Tuesday 30th May at 5:45 pm (until 7:30 pm).
The meeting point is right outside the tourist information centre:
Office de Tourisme et des Congrès, 11 boulevard Bancel Valence.
To join in,  please book the tour in English or in French on the online questionnaire sent by e-mail.

Here is where the Midi begins ! 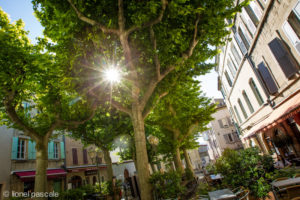 Valence, the strategic capital of the Drôme département, is the gateway to the South of France. Situated where the Vercors Mountains meet the Ardèche, on the banks of the mighty River Rhône, Valence and its surrounding area reflect a certain lifestyle, a way of life on a human scale.
With a population of 70,000 inhabitants and a conurbation of 210,000 inhabitants, Valence has held on to all the charm and unspoilt character typical of the historical towns and cities of the South of France. Its colourful markets, parks and gardens, characterful shady terraces and welcoming pedestrianised streets have a distinctly Provençal feel about them. In ancient times a Roman city, Valence boasts a host of sights that prove a draw to visitors: a highly original historical and architectural heritage, awarded ‘Ville d’Art et d’Histoire’ certification in 1985; a rich and varied gastronomic reputation combining big names in French cuisine with mouthwatering culinary specialities; an active cultural and sporting scene which animates the whole area all year long.
Today, Valence is the beating heart of an urban community that draws on a wealth of riches from the surrounding countryside.

AN ARCHITECTURAL HERITAGE THAT REFLECTS A VIBRANT HISTORY
Valence’s fascinating history is laid out for all to see in the streets and historical centre, which is crammed with architectural treasures. The host of monuments in the heart of the pedestrianised district that survive to this day reflect the different eras and key chapters in the city’s development.

CULTURAL DIVERSITY
The thriving Valence conurbation is a key centre of the region’s cultural and recreational life. A diverse cultural heritage has grown up in this culturally vibrant city.
> FOR MORE INFORMATION

The Château de Grignan was built in the Middle Ages as an acropolis dominating the site and the village. 16th century rebuilding transformed the edifice into one of the greatest Renaissance châteaux of South-East France and further building in the 17th century into « one of the finest antiquities in France ». The presence of Madame de Sevigné and her daughter Madame de Grignan, the privileged place the château occupies in their correspondence and the influence of Comte François de Castellane Adhémar de Monteil, « Viceroy » of Provence from 1669 to 1714, all conspire to make this a key site in the history of the region.

For a first view of the Château de Grignan

For the pleasure of discovering Drôme

For the pleasure of discovering Ardèche